skip to main | skip to sidebar

Yes, I know it is a long time since I posted, but you know how it is, things crop up and you just don't get around to it.
What's been happening? Well, mainly I am now involved with Taupo SeniorNet and find the time just goes so quickly! Tutoring, maintaining the website, studying manuals, and now I have accepted the Course Registrar's job. This is something I am very new at, but hope to do a good job and keep things humming along as well as my predecessor has done for the past 11 or so years.
Today was our AGM and we were very fortunate to have Grant Sidaway from Seniornet Federation speak to us. He is so motivating and a great presenter, I think we all agree on that. His talk consisted of "New Technologies" a subject close to my heart, as I just love trying out new gadgets and couldn't wait to get home and try something on my Android Tablet. Similar to the iPad, and does almost everything you can think of. (Unfortunately there is no app that will clean one's oven or scrub out the shower!)
I tried the app called Shazam. You open it and then point the device at the music which is playing and it collects the song and the information about the track, name of singer, band, etc and you then have the option of "tagging" the song. You can make a playlist, or watch the artist performing the song on YouTube. Truly amazing! I needed to do a bit of fine tuning (please excuse the pun) but I succeeded in getting a couple of my fave songs onto my Droid.
I am hoping to be able to blog a bit more in the future, so as to keep up with the different goings on in my life with Seniornet. I will try not to be boring!
Posted by Lakewood Lady at 9:27 PM No comments: 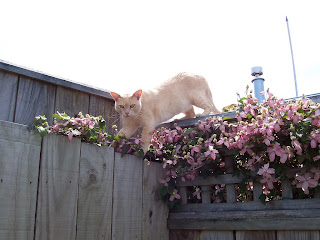 When do you stop hoping that one day soon your beloved pet will return?
At what stage do you put away the food bowls and toys that he once enjoyed?
How long do you wait to see him running along the fence or up the driveway?
What if you locked the cat door and he wanted to come in?
Will he be waiting for you curled up on the couch when you return from shopping, or be under the covers in a suspicious lump on your bed?

Where is he? Has he been taken away? So many questions remain unanswered and yet with all your heart you hope that he will return one day!

All the usual things have been done. The posters in the letterboxes, the many calls to the SPCA, the newspaper ads, the radio bulletins and the searching and calling for him on quiet nights up and down the street.

How long do you wait? One month? Three months? One year?
Posted by Lakewood Lady at 6:45 PM 1 comment:

The most awesomest of places

Bell Block Sedona AZ
Originally uploaded by Cooky2
Not enough wows or aahs can express what you feel when you see these amazing rock formations for the first time. Sedona is a place about half way between Phoenix AZ and the Grand Canyon.
It is an area from which spring memories of childhood and all those cowboy westerns we watched as we were growing up.

Sedona the town, is now a bustling tourist destination and is filled with galleries, shops and eating places all competing for your $$. We found a lovely one called the Secret Garden Cafe, shady and private, really nice food and long cool drinks!

It seems everywhere you look now, there is the i!  i this i that;  What does i really mean?  i for information, i for who you are, as in i am, i for first person recognition, i am who am. (God said that once.)
Now we have iPods, iTunes, iPhones, iMacs, iChats, iPhotos, iWork.  Then there is iGoogle, iLegends and iRobots!
Will we ever progress to we?  We the People, first line of the constitution.  We will we will rock you, we shall overcome, we are the champions, those are common ones. You the readers of this iblog, are welcome to add more i and we stuff as you come across them.
iDot
Posted by Lakewood Lady at 5:09 PM 1 comment: 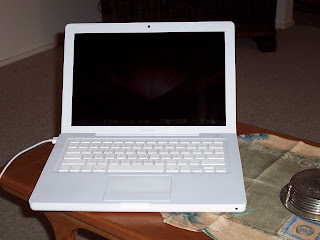 I have often wondered how a person feels when they sit with a mac on their lap.  Now I know, because I am one of them!  Many times I have thought I would make the change to something which is obviously a top of the line machine, in the outer case, hardware and software that “just works”.

Things I like about mac are, the robust and compact notebook style, the shiny white appearance, the glowing backlit apple on the top of the case, two finger scrolling, the really cool magnetic anti-trip power adapter and the equally magnetic close feature on the case.

Software and hardware that is happily married work as a team to produce the ease of functionality and user friendliness that is known to mac users worldwide.  The transfer of files is such a simple operation and even importing things such as address book files takes only a few clicks.  My favourite neat features include, the dashboard, photo booth and the stackability of the documents and downloads folders.  Drag and drop makes life simple, no complicated uninstalls and removals of unwanted applications.

Although I am still trying to come to terms with the fact that security is not such a big issue with mac, I feel tempted to download some sort of antvirus and anti spy/adware programs, that I for so long had to live with.  Maybe I will do some further research on this matter.  I do have the firewall switched on and this is some consolation in the meantime.

Prestige comes from owning a mac and I feel quite snobby sometimes, until I think back to my early Windows days when I was so proud to even own a computer at all.  Ah what fun, all those mistakes and problems!  I feel I have earned the right to own this mac as a reward for those trying times.

Posted by Lakewood Lady at 7:46 PM No comments: 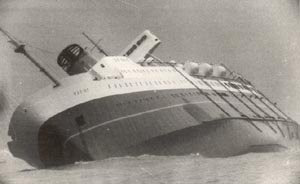 On the 10th April 1968 I was 20 years old and my memories of that day are very clear in my mind. In New Plymouth that morning, sitting around the kitchen table were my father, sister, brother in law, brother and me.

I was due to take the train to , to catch the ferry to , when we heard on the radio that the inter island ferry Wahine, was in trouble in bad weather at the entrance to harbor. The others at the table joked about the bad weather and that “It was going to sink” and I “shouldn’t bother going if I were you!”

It was the ferry that I was supposed to catch to . I didn’t know at the time that my other brother was meant to be on the Wahine and that he missed out on getting a berth on it. He wanted to come to and surprise me and travel back together.

I caught the train around 9 am and as we got closer to the weather got worse and I saw trees down on the road and all the traffic held up. Someone on the train had a transistor radio and we were listening to the updates on the ferry situation. It was not good and by the time we reached , it had indeed sunk!

railway station was in utter chaos when I arrived and there were bus loads of survivors being brought in to the station as that was the designated place for the civil defence. I was pretty worried by that time, not knowing if my brother had been on it or not and I kept listening to the announcements of the passenger list over the PA system.

It seemed like a long time before I found out from someone that I was able to get accommodation at “The People’s Palace” a hotel in . The shipping company paid for it for any one holding tickets for the Wahine’s return sailing to . My memory fails me at this point but somehow I got word to my family in New Plymouth to let them know that I was going to be returning home the next day. In the meantime, they’d had a telegram from my brother in saying that he wasn’t on the Wahine.

That night, I and all the other patrons at the hotel cried as we sat around the television and watched the news report of the sinking. So many heroic stories and so many tragic ones emerged from that terrible day in NZ shipping history. One in particular I recall, was told to me on the bus on the way back to New Plymouth the next day. I sat next to an elderly lady who had been washed up on Seatoun beach. She had been helped ashore by a young man, but he went back into the sea before she was even able to get his name.

51 people lost their lives. That is one day in my life I can never forget.

Thanks to Geonet NZ.

Photograph of the interior structure of a rhyolite dome, showing a radial pattern of cracks formed as the lava cooled. (Mason’s Rock on the north shore of Lake Taupo)
The main hazards of dome growth are tephra fall from explosive eruptions and avalanches of hot lava from the sides of the dome.

Gases are the driving force of explosive eruptions. The main gases are water vapour and carbon dioxide, with small amounts of sulphur, hydrogen and other gases. These gases rarely pose a direct threat as they quickly mix with the air and are diluted as they blow downward. Some of the gases, such as sulphur dioxide and hydrogen fluoride mix with water droplets in the eruption plume to form acids which will attack skin, clothing and metals. Rain falling from an eruption plume may be very acidic and this acid rain will attack foliage and crops over a wide area, perhaps even greater than the fall of tephra. The acid rain may also contaminate water supplies. Acidic water is not a major health hazard, but the acid may leach lead from nailheads and flashing on roots and lead poisoning may result. There is the remote possibility that heavy gases (mostly carbon dioxide) emitted before or after an eruption will collect in low-lying areas or confined valleys and cause suffocation. Generally there is enough wind about the lake area to disperse any gas cloud that may form.
Posted by Lakewood Lady at 6:31 PM No comments:

This is a Flickr badge showing public photos and videos from Cooky2. Make your own badge here.

Lakewood Lady
I was born the youngest of seven, just post ww2, so I am what you'd call a "baby boomer". I went through all the normal stages of development, and even survived the sixties relatively unscathed. I would say I have a fairly balanced view of the world and what's going to happen, happens, there isn't often a reason, well none you know of anyway. I hope to share some of my thoughts and ideas about these things, hence this blog.